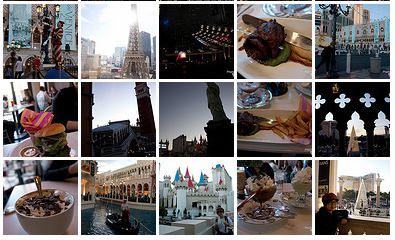 Several weeks ago, I went to Las Vegas for a 5 days New Year trip with my mom, a friend and her mom. An all ladies trip that consisted of walking, shopping, eating and more shopping- fun!

Going through the photos yesterday (after 3 weeks), I finally decided to blog about it. Prior to the trip, I had a few sleepless nights to plan our itinerary, print out coupons and download maps. Turned out we followed the planned route like 1/3 of the time… and none of the coupons were used. We did not even have time to watch those free admission shows.

View from our hotel room...

Getting off the plane, we rushed to our first hotel (Bally’s) to check in. The check in area was right next to the casino, which filled with smoke and unpleasant odor. Lucky it didn’t take long, we unloaded our baggages and began our sightseeing along the Strip. It was New Year day- the street was packed, traffic super congested. And we strayed off our original itinerary right from the start .. =P

To summarize, we navigated the southern part of the strip in the first day and our feet were sore. No joke, it was insane how much we walked, the aftereffect bothered me for the rest of the trip. We stopped at M&M store -> MGM hotel -> City Centre area (Aria, Cosmopolitan, etc) -> Caesars Palace -> Dinner at Cheesecake Factory.

Outside Aria Hotel, its mall had many high end fashion retails that I felt ashamed of walking in lol

These are not dummies, but REAL hot gurls @ a lingerie store in Cosmopolitan hotel

The Forums shop at Caesars Palace, it has the largest H&M store in the world- not that I had the mood to buy anything.... at the time I just wished I was on a wheelchair

Day 2- Yummy food, no chance to flex our feet

Second day began with a late brunch at the restaurant Serendipity3, famous for its forzen hot chocolate. It was a neat place, I love how the natural light brightened up the place.

The decor gives a lazy and chill atmosphere...

Lovely frozen hot chocolate... it's really rich and creamy, similar but different from choco smoothie. I even dreamt about it before the trip!

Cute plating of the omelette... I ordered steak frites, it tasted alright.

After stuffing our stomachs, we went to our ONLY stop of the day- the North Premium Outlet Mall. Okay, that wasn’t the plan.. but we ended up staying there pretty much the entire day. Bought quite alot of things, and *gasp* we somehow wandered into a Michael Kors store before we left… you can guess how the story ended.

On our way back to Bally’s, we watched the famous Bellagio fountain show –

We stood there for like 10 minutes... it was just water shooting up the sky, nothing impressive IMO.

Before we headed to Bally’s to end our exhausting day, we went to Pink’s! outside Planet Hollywood to try their famous chilli dogs. To me, it was just any other dog with chilli that tastes like Tim Horton’s. But of course, I’m not that into hot dogs anyway.

Third day started with an amazing breakfast at Mon Ami Gabi of Paris hotel. It’s an outdoor cafe, with a clear street view and facing Bellagio- great for people watching. We had to carry our luggages into the restaurant though, due to hotel switch (Bally’s sucked) to Planet Hollywood.

Soon, we took the Deuce (bus on the Strip) to visit hotels on the northern part of the Strip, such as TI, Wynn, Venetian…

Bus stop outside of Paris

Wynn has a really grand interior, esp. their bathrooms =P

Taken at Fashion Show Mall, where I bought a pair of lovely oxfords.

As night fell, we walked back to Bally’s to catch a shuttle bus to Rio for it’s seafood buffet. VERY DISAPPOINTED, DO NOT RECOMMEND!

Street performers. I saw a Woody later on, with his cowboy hat off, showing his "bald spot" - a cooling fan lol

What a slack job. I wanna be one of those street performers.

Anyway, back to ranting about the worst buffet I’ve eaten in my life. It was just horrible. We got the 24 hour unlimited buffet pass… There were two buffets at Rio: the Carnival and the Seafood. When we arrived, the Carnival was packed with hundreds of people… no kidding! So we went for the Seafood (which charged us $15 extra) buffet, where we thought would have more variety of edible seafood. We lined up for 10 minutes and waited for another 10 minutes to get our table. Man, the experience was just indescribable. The only seafood that we ate was crab legs (which btw were available at any dinner buffets in Vegas), the others (small mussels, teeny tiny crayfish, and what looked like overnight lobsters) were just disgusting. Don’t even mention Oysters! The ones that I tasted were spoiled, I was afraid I would get diarrhea. Overall, it was simply shitty and a total rip off. We later checked out the Carnival buffet and my god, there were so many food choices, seeing the crab legs there was like a stab to the heart… I used the “free” plays at the casino’s slot machine, hoping to reimburse those 15 bucks- I won about 11 bucks at the end.

A night shot of our hotel, Planet Hollywood. The room was smaller but much neater!

Day 4 seemed like the highlight of the entire trip. Shopping addicts like us of course couldn’t miss to opportunity to visit the outlet store at the south end of the Strip- it was an indoor mall… I didn’t buy anything because I had already bought too much previously.

Saw this cute doggie on our way... the sign read "Photo for $1". Too bad I had no changes on me, I just sneaked a shot XD

Before shopping, we had to soothe our hunger- so we went to the Village buffet at Paris hotel.

Long lineup, so I was randomly taking shots....

What a great contrast comparing to dinner the day before…. it’s literally heaven and hell. There were chefs to make crepes and the cheese/parma ham there was awesome too… Skipping the shopping part that came thereafter, since it’s just a lot of walking, and walking. Las Vegas really is a shopping paradise (prices aren’t low, but there are many malls+high end stores)… Any shopaholics can stay there for days just to shop(though I got sick of it pretty soon)! For dinner we went to Planet Hollywood’s buffet, the most memorable part was that they had cotton candy! My friend ate like 6, and I was close too.

Outside the O theatre at Bellagio hotel

We watched the 10pm show of “O” at Bellagio. I’ve seen one or two Cirque du Solei productions before… and this one, I would say, didn’t wow me as much as the others. The staging was amazing though, with the pool forming at one instant and disappearing at the next. The biggest issue was the plot… was there a story line at all? The entire show was about this freak like creature chasing/dancing with a pretty *young looking* lady… with 2 silly clowns joking here and there. Maybe I got it wrong, but this sorta reminded me of pedophiles.. Anyhow, it was worth the money and I mean, what’s the point of going to Vegas without watching any shows? Next time, I will try the Beatles Love show, which apparently has really good ratings and touching plots.

It shouldn’t even count as a day, since we checked out early morning and took the cab to the airport.. after I saw this friendly reminder, I had a sudden urge to play a couple rounds of slot machines while waiting for the flight =)

This photo reminded me that I didn't even get to see the desert or the Grand Canyon!!!

I’ll definitely visit Las Vegas again.. there is so much left to see! I didn’t even experience the nightlife to its fullest! And shows….my top show wish list now is: Phantom of the Opera and Beatles Love.

After the flight back to Bellingham, we went straight to MacDonald’s for their 20pcs mcNuggets… since we saw their promotions about buy 40pcs get 10 pcs free. Obviously, we bought 2 orders, but turned out the promotion applied on Sundays only. So we just stuck with the 40pcs- THANK GOD WE DID! OMG, I had almost 20 pcs of those nuggets and the very same night… I got sick and barely slept! I vomited twice and my friend 8 times!!! She lost 2 pounds while I didn’t shed a bit… but I guess that’s fair haha