OK, Fuji-goko (富士五湖)is not on my travel wish list… It all starting with reading this post from a blog that I frequent in the middle of last week. WOW, I thought, I would like to see Mt. Fuji from this paradise too. OK, I can occasionally spot Mt. Fuji from the office… but this is certainly different… where you feel like you’re just right under the mountain, and it’s decorated by a carpet of Shibazakura(Mos Phlox, 芝桜). And the Shibazakura Festival event lasted until May 27th… which meant, either I went last weekend or I would forever miss the chance to see such a beautiful sight. However, I did not plan the trip until Friday night… because I was caught up with work, and I was uncertain about the weather during the weekend. People say there is no point going if you can’t see Mt. Fuji- because even on a clear and sunny day, Fuji-san may still be blocked by clouds, due to its altitude. The best season to visit would be in winter, while summer (June/July) is the worst because it’s a stormy season. One of my colleagues said she visited twice, but she missed Fuji both times. What a pity!

So, the weather forecasts on Thursday and Friday morning said it would be raining on the weekend, so I pretty much gave up the thought. But when I checked it again Friday night- the weekend would be sunny and clear! I immediately researched on where to go (other than seeing Shibazakura). Even though a day trip would be doable too… going for two days made more sense… considering I was traveling to a different Prefecture. I purchased my bus tickets set, along with a discounted FujiQ Highland day pass… and walked to a Lawson to pay the fees at 1am , while the bus would be departing at 7am! I quickly wrote out my itinerary, reserved hotel and packed… then managed to sleep for 4 hours. Learning from my pervious experiences, I decided not to bring my 15 inch MBP to lighten my load. It was the best decision to make!! I pretty much just brought my wallet, camera, phone and a set of clothes.

Waiting for the bus in the morning outside Yokohama station..

Took me a long time to find the bus stop. The bus was filled, it’s quite a popular place for locals to have their weekend getaway. Especially when Yamanashi prefecture is just right next to Kanagawa. The Fuji-Goko area (where I was heading), and the Hakone area are famous places for Onsens and sceneries of Mt. Fuji. About Fuji-Go-ko area(富士五湖), you can read more about it here. And during this trip, I’ve seen three of them: Kawaguchiko, Saiko西湖, and Motosuko本栖湖。

I hopped on the bus and fell asleep instantly. When I woke up at around 9:30am, we were almost there!

I could see Mt. Fuji through the window! Yeah!

Outside Yamanakako山中湖, the biggest lake of the five, and the closest to Mt. Fuji. I want to visit it in August, for a firework festival, plus going to Oshino Hakkai (忍野八海)

The bus made a brief stop at Yamanakako and then FujiQ Highland. At Yamanakako, Fuji-san appeared bigger than ever! Couldn’t take any photos because I was sitting on the other side of the bus… but it was so beautiful that I made up my mind to just visit Yamanakako next time.

FujiQ!!! It has some of the world’s best roller coasters! Will talk more about it in my later post.

But my stop was Kawaguchiko, the most popular lake of the Fuji Five Lakes. It’s the most developed lake out of the five and where climbers would stay before or after going up Fuji-san, since the mountain base can be easily accessible by train from Kawaguchiko. The area is populated with hotels, and onsens… what’s better than dipping yourself in hotsprings after climbing Fujisan? I will be climbing Mt. Fuji in the summer, so definitely looking forward to visit again!

The bus dropped us off at around 10ish, outside Kawaguchiko train station.

Guess what’s behind the station?

O-M-G! Fujisan!! Look at how clear the sky was! BTW, my hostel was just right across from the station.

After buying the bus tickets to go to the event venue, I saw this sightseeing bus (no ceiling) and thought that’s the one. But no, the Shibazakura bus was a crappy one.

I had some time (half hour) before the bus departure, so I walked down to the lake.

The entrance/gate to the lake area.

Koinobori were still hung up , though Tango no Sekku ( or Boy’s Day) was over.

The lake side was lined with hotels. And what a perfect sunny day!

Did not have much time at the lake, as I had to head back to catch the bus.

On the bus, I saw this weird building. You’d think it’s a museum? No, it’s a restaurant named Houtou Fudo (ほうとう不動) that sells the famous Houtou noodles.

The bus ride was approx. 30 mins. And the venue was nearby the Motosu lake.

Site map. The prime time to view Shibazakura would be in Early-Mid May. Since the season was ending last weekend, I only hoped for the best.

Can you see the water reflection? it’s pink!

But still, I’d say 40% of the flowers were gone. You can see how sparse they were.

Look at how empty the field was…

Mt.Fuji was actually in the background… but was covered by clouds. WHY?! The sky was so clear an hour ago!! 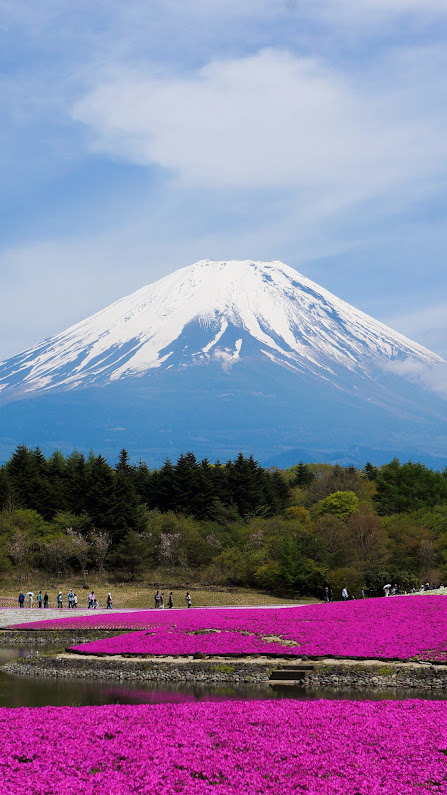 Compare my photos with this photo (Courtesy of Danny Choo), which was the reason why I visited T_T

WOW, there were still sakura in late May?!

It was still early, so I decided to go eat something, while waiting to the clouds to go away

My brunch: Motsu-Yaki. Basically some kinds of organs. Delicious!

Besides food stalls, there was also a dessert restaurant and a foot bath in the far end.

There’s also a viewpoint… but nothing to see up there.

People sitting down, probably waiting for Fujisan too!

Ordered Imoko to eat while waiting…. Imoko is some kind of potato. This was deep fried with breading…

There were also some souvenir stalls… so I went shopping. Shibazakura just doesn’t look pretty in a pot.

Still no luck… the clouds wouldn’t go away.

I wished I went there a week sooner.

One last look for Fuji-san… still nothing.

Disappointed, but had to move on to next destination. So I took the bus back to Kawaguchiko station.